10 things to do in Mongolia

Mongolia is similar to Mars, only closer and more accessible. Actually in East Asia, where Mongolia is situated. In the country with the lowest population density, you find yourself tête-à-tête with a cosmically unreal nature. Dunes in the Gobi desert, bright blue lakes, volcanoes, reindeer in the taiga, the hospitality of nomads in the middle of the boundless steppe - all this is worth it to shake along the Mongolian roads. Juulchin shares tips on where to go and what to do in this incredible country. So that your tours in Mongolia would be more fun and more enjoyable.

1. Meet the Sunrise in the Gobi

Listen: Go-bi. It is as if the wind rustles among the distant dunes, and camels, gently stepping, carrying tea and spices along the Silk Road. Contrary to expectations, most of the Mongolian Gobi is clay and stony, with bushes of hard grass and rare hooked saxaul trees. Sands, however, also exist. The most famous are the singing dunes of Khongor Els. They are called singing for the sounds made by grains of sand when moving. Another impressive place is Bayanzag, where bright red sand cliffs pitted by the wind stick out above the ground. Bayanzag is also famous for the fact that in 1923, for the first time in the world, dinosaur eggs were found there.

Even Marco Polo wrote that in the Gobi “mountains, sands, and valleys are everywhere; and no food anywhere”. Almost nothing has changed since the 13th century. Therefore, an independent trip to the Gobi is a task for well-trained people. We recommend joining an organized tour or renting a car with a driver. The active part of the route usually begins in the town of Dalanzadgad, where planes fly from Ulaanbaatar. Hotels outside cities are yurts; overnight stay is atmospheric and very authentic. This destination could be your main motive to travel Mongolia. 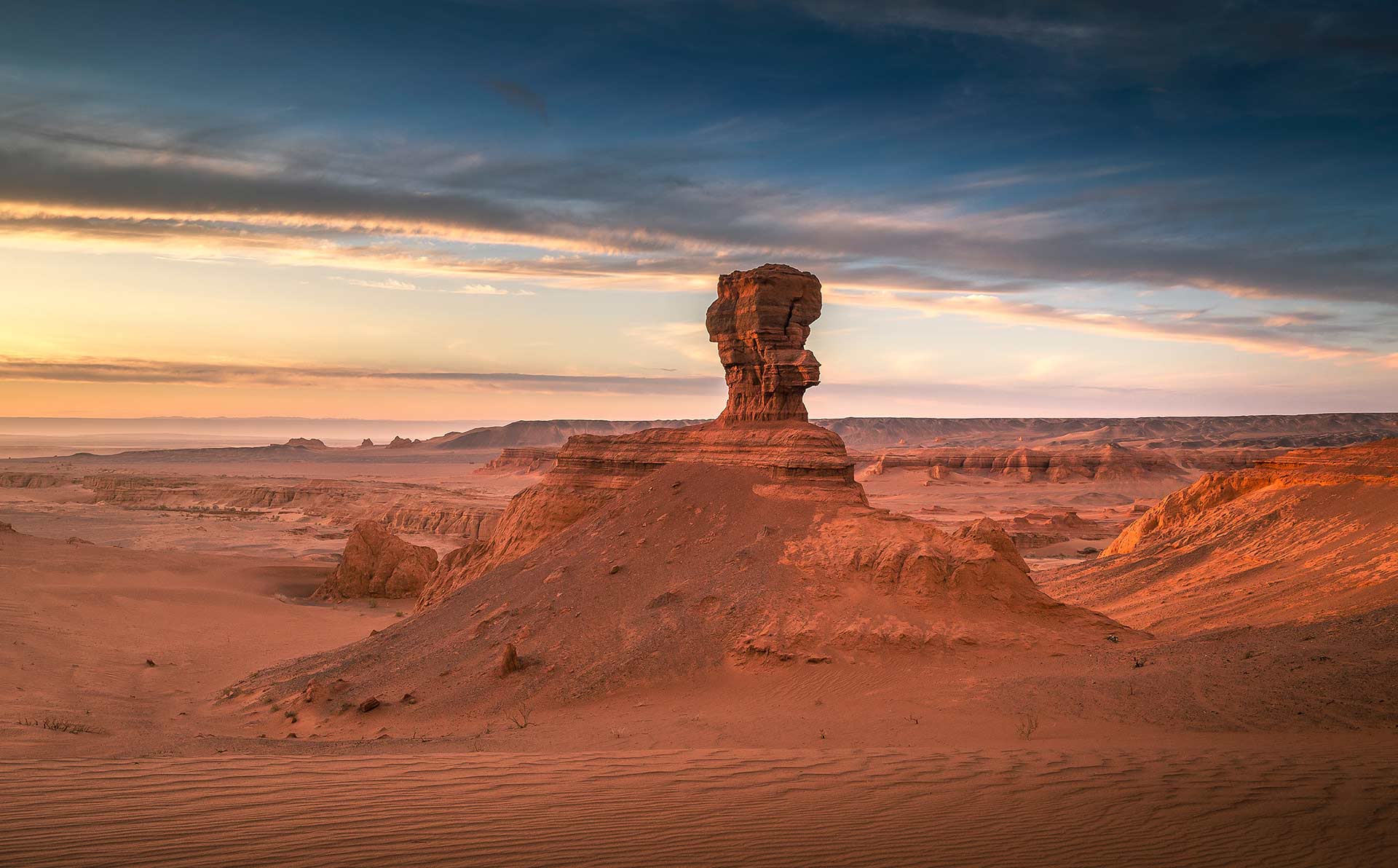 2. Spend the night on the shore of the “Blue Pearl of Mongolia”

Khuvsgul is called the younger sister of Lake Baikal and the Blue Pearl of Mongolia. It is divinely beautiful. A 136-kilometer lake with crystal clear water is surrounded by mountain ranges, along which larch trees descend to the very edge of the water. On green meadows, yaks and horses graze idyllically. To enjoy the harmony of local nature, it is worth getting outside the tourist centers: Khatgal in the south of the lake and little Hanha in the north. Drive as far as possible on a horse, bicycle, motorcycle, car or boat, choose a secluded bay, which is abundant in Khuvsgul, put up a tent and enjoy complete peace. Keep in mind that the road along Khuvsgul is bad, therefore it is better to plan movements with a margin of time. It considered to be one of the best Mongolia tours. 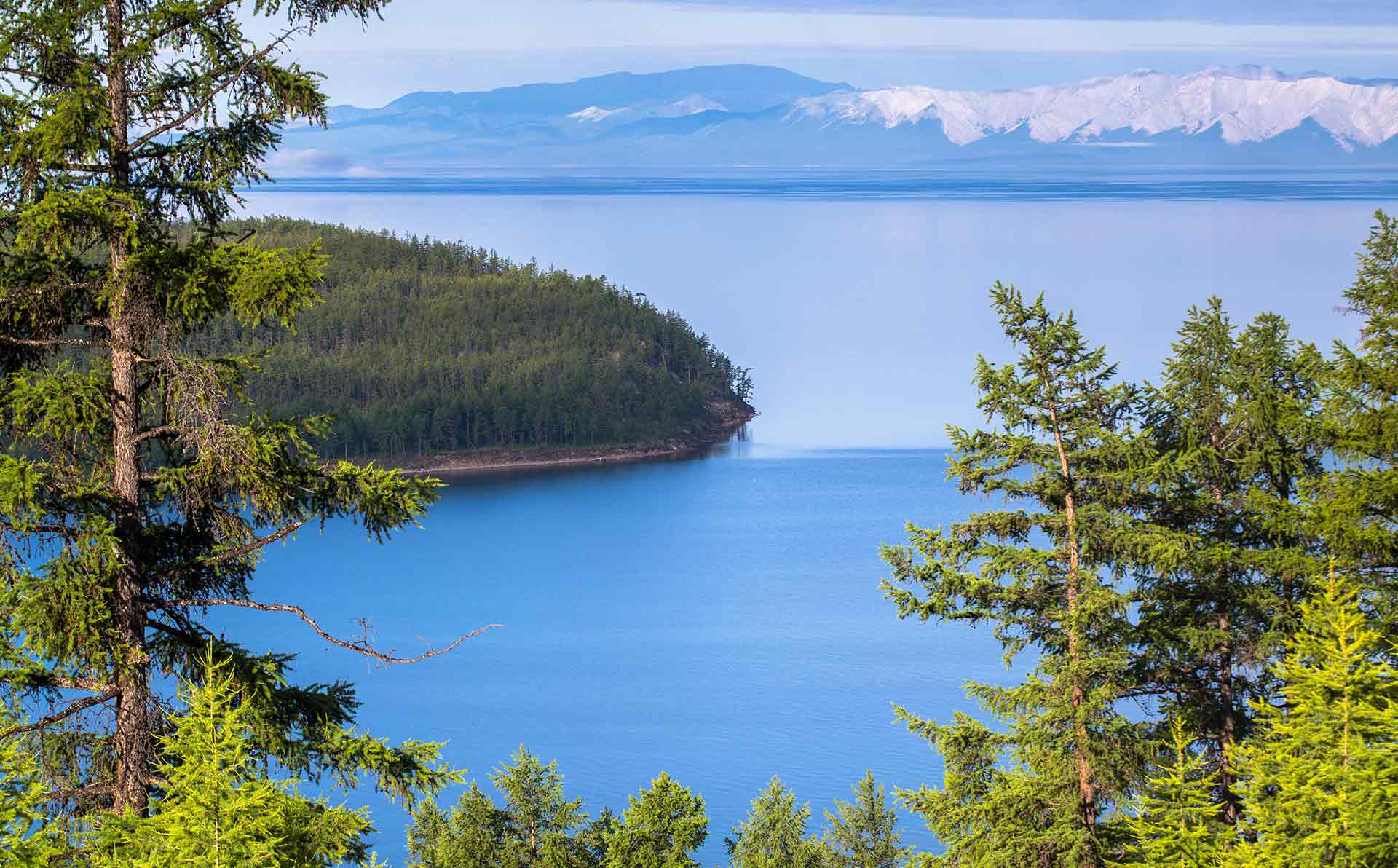 Stone slabs are found in the Mongolian steppe, on which schematic drawings of animals and objects are applied. Deer are most often depicted, hence the name deer stones. They appeared, probably, in the first half of the 1st millennium BC, finally scientists have not yet decided. Why they were needed by the ancient people and why they were offering sacrifices next to them is also not completely clear. Travel Mongolia to discover and see with your own eyes the unknown.

A good place to explore the mysterious ancient stones is Ushkiyn-Uvur, 20 km from the city of Murun. Behind a transparent fence there are 15 deer stones, including a unique one with a relief image of a human face. The atmosphere is complemented by the Kereksur barrow, and images of eerie shamanistic rituals to the rhythmic sounds of a tambourine easily arise in the imagination. It is best to come at sunset, when in the oblique rays of the setting sun, drawings on stones are more clearly visible. It is convenient to combine a trip to Ushkiyn-Uvur with a trip to Khuvsgul, the road to which also goes through Murun. 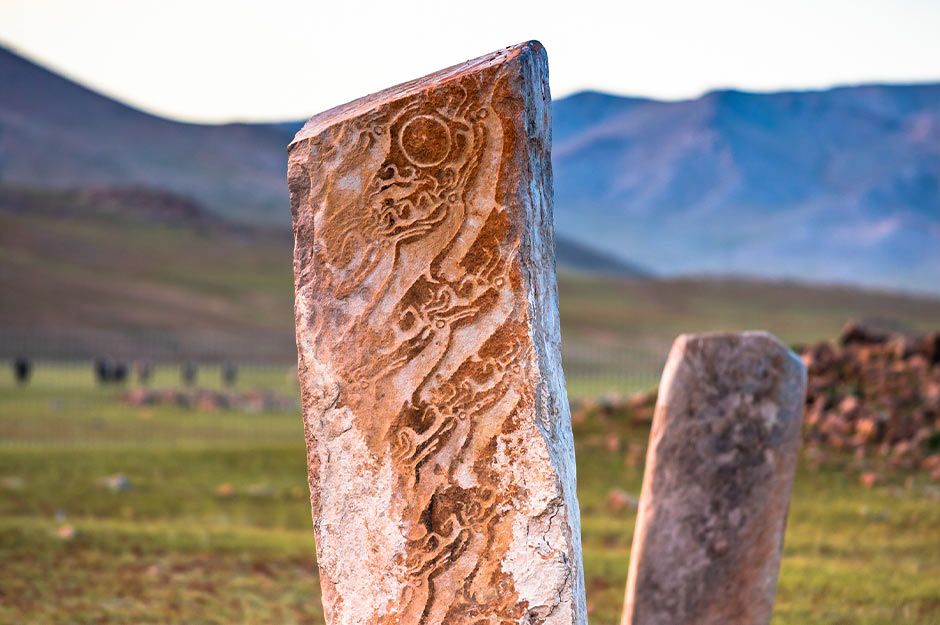 In the west of Khuvsgul where lives a small nomadic people, about whom almost no one knows. The Mongols call them Tsaatans, that is, reindeer herders. Dukha - so they call themselves. Previously, Tsaatans roamed with herds of reindeer along Tuva. In 1944, Tuva became part of the Soviet Union, and the freedom-loving Tsaatans, fearing collectivization, went to their neighbors. In Mongolia, they also tried to "domesticate": they were identified in collective farms, animals were taken, but in the end they retreated. Now there are less than 300 Tsaatans left. They still live in spiky tipies (and not in yurts like Mongolians), and their entire existence revolves around deer.

Only tourists who accept willingly and almost officially distract from deer. To get to the camp, you have to thoroughly jump on the bumps in the car, and then in the saddle, but they will be greeted as a native: they will feed you from the heart and will tell you in a friendly conversation how one of the last nomadic people live on earth. You can get to the Tsaatans on your own, but this is the rare case when it makes sense to join the finished tour. This wonderful experience can be provided to you by precursor Mongolian tour operator “Juulchin”. 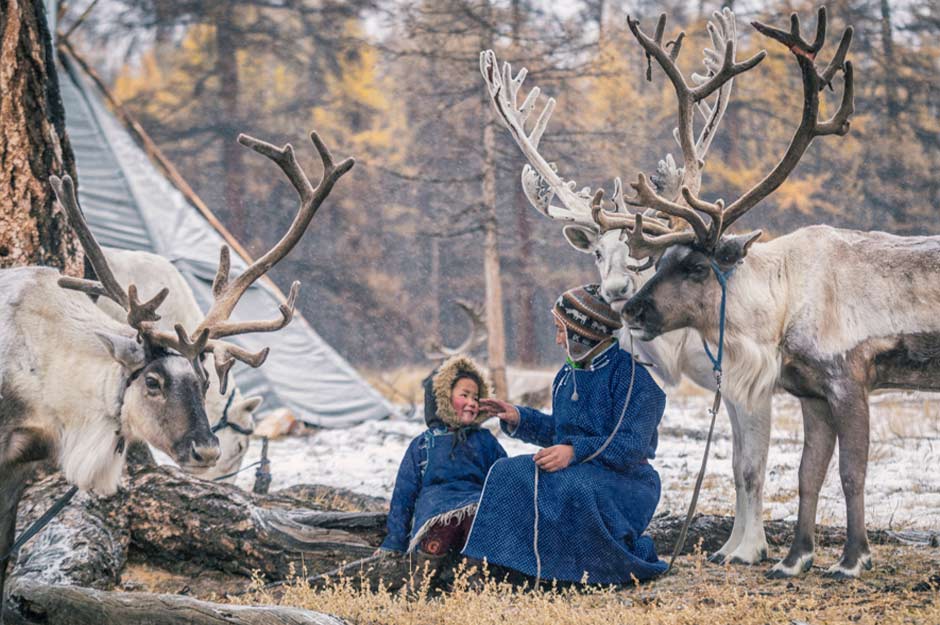 5. Look into the crater of a volcano

Mongolia is full of “Martian” landscapes, but some are particularly striking. In the central part of the country lies the large lake Terkhiin Tsagaan (White, if translated). On a clear day, it reflects clouds driven by a strong wind and a blue-mild sky. Add to the landscape the cone of the volcano and the lava fields - and you will get beyond beauty. Especially if you do not forget about the polarizing filter for the camera.

The extinct volcano Khorgo is located east of the lake. You can climb it and, freezing with delight and horror, look right into the crater. If climbing is not your path, just wander among the frozen lava flows, trying not to think about what happened here on the Day X. You can spend the night on the lake in in a yurt camp. The Khorgo Lake and Volcano are part of the Khorgo Terkhiin Tsagaan Nuur National Park. 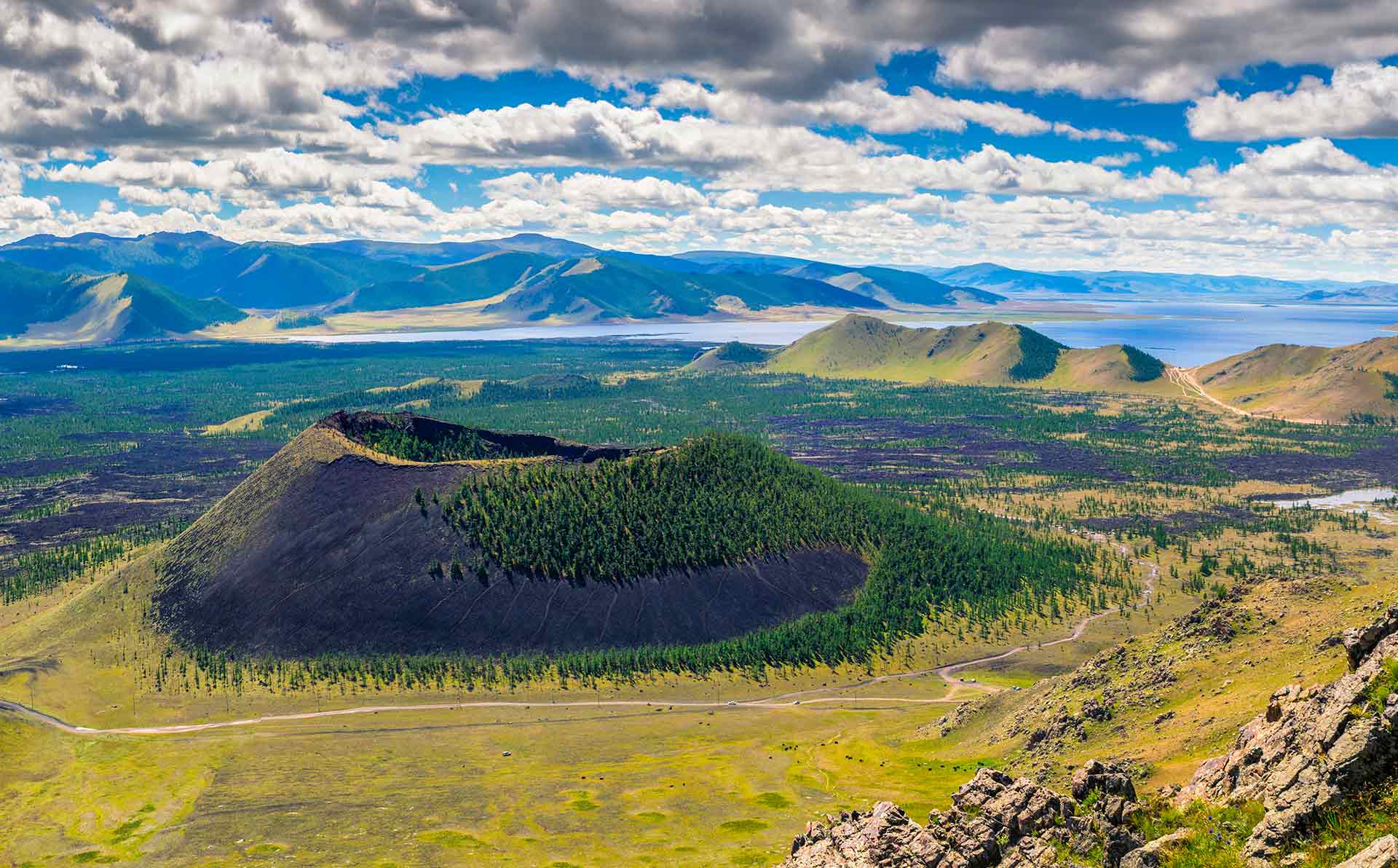 The cuisine of Mongolian people, like other nomadic peoples, is simple and satisfying. Forget about asparagus and broccoli, but there is plenty of dough and meat. Buuz, steam Mongolian dumplings with a generous meat filling, you will like it from the first try. There are taken by hand. First you need to bite a buuz and drink meat broth from it, and then take on everything else. Khuushuur are almost the same as buuz, only they are deep-fried and not steamed. In any yurt-dining room in the middle of the steppe you will be prepared with tsuivan - homemade noodles with meat, without frills, but tasty.

The favorite drink of the Mongols is Sutei Tsai, black tiled tea with milk, salt and sometimes butter. For those who are on a diet, we inform you: sometimes they put dumplings in it - such a dish is called banshtai tsai. You can polish a hearty dinner with fighters - slices of dough, deep-fried, or aaruul - dried sweet curds. All these delicious foods will add your Mongolia vacation some spice. 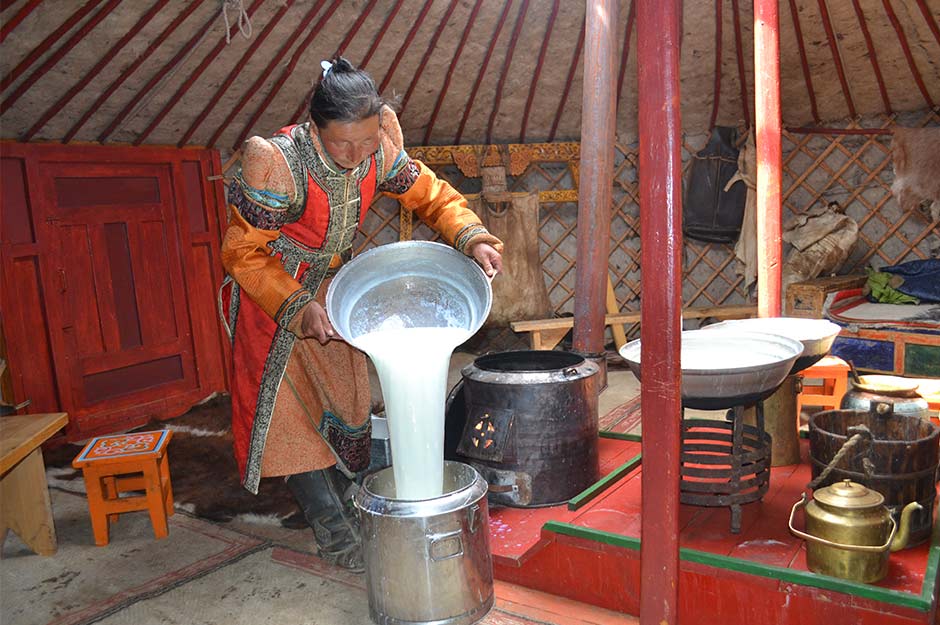 Buddhism came to Mongolia from Tibet, incorporating traditional beliefs. The soil turned out to be fertile: by the beginning of the 20th century, there were more than 700 monasteries in Mongolia, in which 110 thousand monks lived - about a third of the male population. During the repressions of the late 30s, most monasteries were destroyed, and Buddhism remained disgraced right up to the 90s.

Gandan was the first to open in Ulan Bator, back in 1944. Until 1990, it was the only one, and still is the main monastery of the country. It is fully called Gandantegchenlin - "a great place full of joy", and as if exported from Tibet. Bright ornaments, multi-colored multi-armed deities, soaring corners of roofs, monks in burgundy robes - after the gray streets of Ulaanbataar you find yourself in another world. In the main temple is the famous 26-meter statue of the Bodhisattva Avalokiteshvara - a copy of what was lost during the Second World War. In order to feel your involvement, and at the same time invest in karma, spin the prayer drums, walking clockwise around the stupa, and feed the pigeons along with laughing Mongolian children. 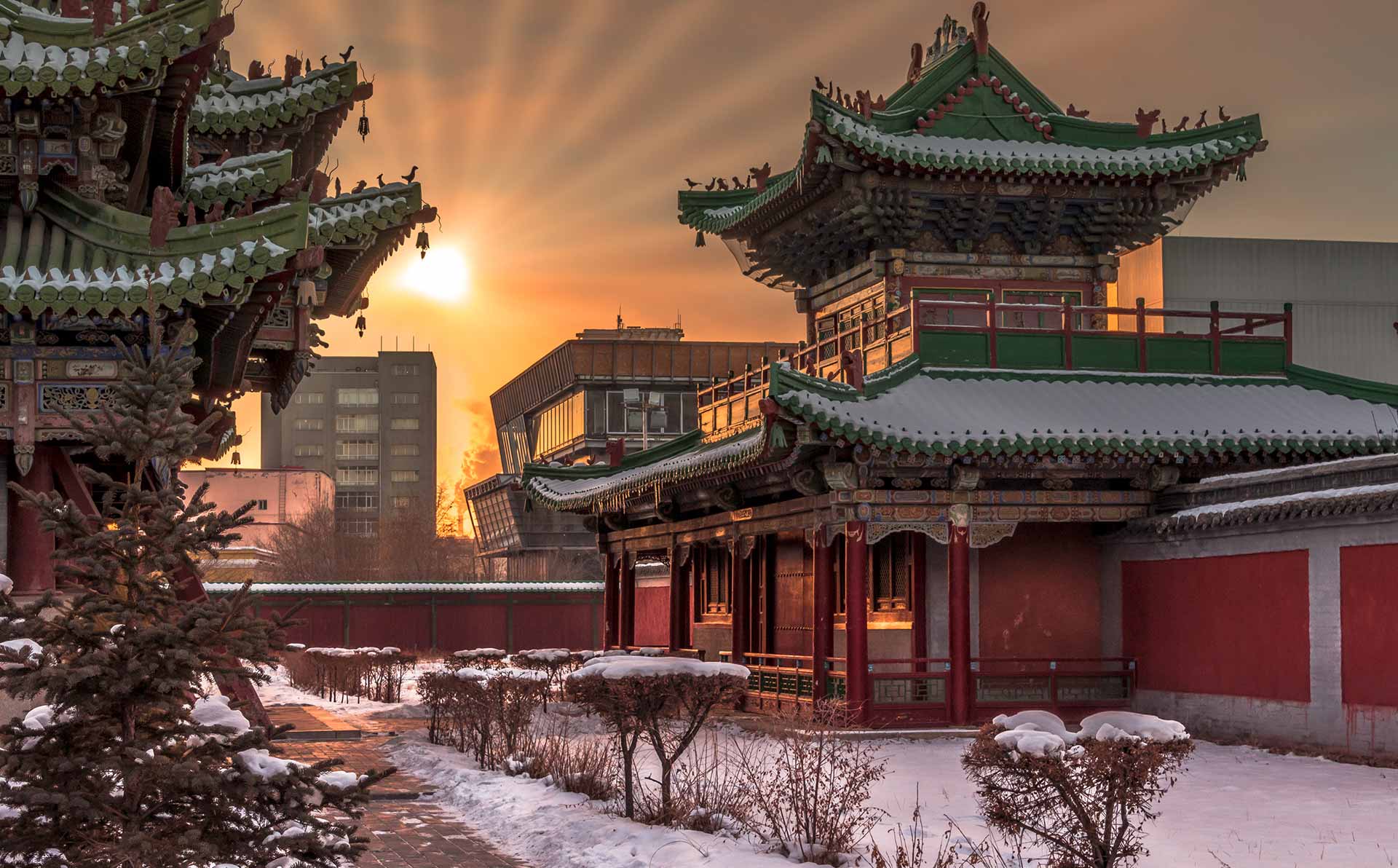